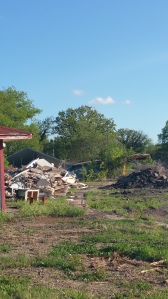 Disclaimer: All the photos were taken legally — I never entered the park.

It is so sad to see that the demolition of former amusement park, Joyland, is in full swing.

For those of you who don’t know what Joyland is: Joyland Amusement Park was an amusement park in Wichita, Kansas, United States. It was in continuous operation for 55 years, from June 12, 1949 to 2004, closing permanently in 2006.[1] It was once the largest theme park in central Kansas and featured a wooden roller coaster and 24 other rides.

I remember Joyland so well growing up. Oh and that wooden roller coaster was legendary! Joyland was indeed a place full of joy. I’m sad that it’s being torn down, but understand it brought so much joy to people and is truly at the end of its life cycle.

I’m equally sad vandals broke in, set fire to many of the buildings and other vandalized them. The lack of respect is astonishing. Shame on anyone who does that.

Goodbye Joyland, you will live in my heart forever and in the hearts of so many others.