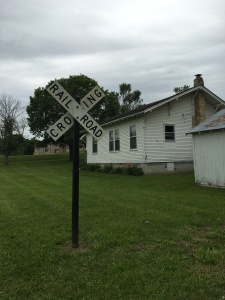 lesson about the town. It’s the original origin of the term “Jayhawkers.” The city’s website states: “During the Civil war the members of the Seventh Kansas regiment, commanded by Col. C. R. Jennison, became known as “Jayhawkers,” and probably from this fact the jayhawker came to be regarded by many as purely a Kansas institution,…”

The Linn County Courthouse is the second-oldest operational courthouse in Kansas, built in 1886.

What really caught my eye at this town was its amazing Historical Park. There are several historical buildings there that one can wander around and look at including a school, a train depot, a corncrib, a windmill and a few other buildings. There’s a lovely covered bridge that is a great place to take a portrait of someone. Of course, I had to do that.

I loved the pure history of the park and each building had plaques with information about its history. A half hour here and you’ll be well-versed on the buildings and get several history lessons as well.

Another building, the Clausen Cabin, was built in 1900 and was moved to the current site in 1982. It w 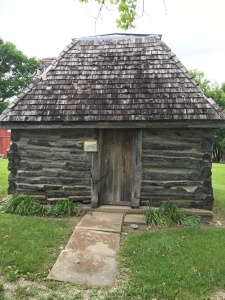 as the last log cabin inhabited in Linn County and was made of persimmon wood. It was taken apart log by log and moved to Mound City.

I highly recommend this trip! There’s so much history wrapped into this small park!