Another road-side gem in Kansas is the St. Aloysius Church Historic Site in unincorporated community of Greenbush, Kansas. To get there go to the website below and follow the map. It’s a 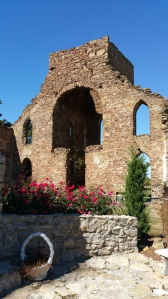 According to the Kansas Travel website, a church and church ruins are side by side. “The 1887 St. Aloysius Church was replaced by a larger building in 1907, but the 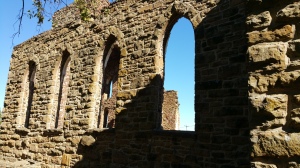 newer building was struck by lightning and destroyed in 1982 and the congregation returned to the older building. The registered Kansas state historic site is very picturesque,” the website stated.

Here is the entire text of the legend of Greenbush, which was borrowed from the website mentioned above:

THE LEGEND OF GREENBUSHAccording to legend, in 1869, Father Phillip Colleton, was caught at this site by a furious hail and thunder-
storm. The frightened priest took refuge under his
saddle and vowed t

hat if his life was spared, he would build a church on this spot. The fervent promise resulted in the establishment of St. Aloysius, Greenbush. The
first Catholic Church erected in Crawford County was
a wooden frame structure completed in 1871. Located on the Historic “Mission Road”. The church was destroyed by a storm in 1877. Parishioners quarried limestone from Hickory Creek and completed the second church in 1881. The first resident pastor, Father F. M. Verdan, arrived in 1882 and served the church for fifty years. A larger church was needed and completed in 1907. The 1881 church was converted into a community building. The third church stood for 75 years as a landmark before it was struck by lightning and burned in 1982. The ruins remain. The 1881 church was 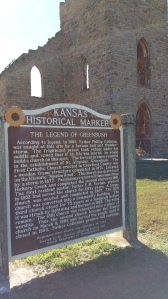 renovated into a place of worship. Thus the second church became the fourth church on March 9, 1986 and served the people until it closed in 1993. Father Colleton’s promise will continue.