Today, the massive building and track sits abandoned and rotting. There were rumblings it would be turned into a casino, according to an article by the Capital-Journal. Howev 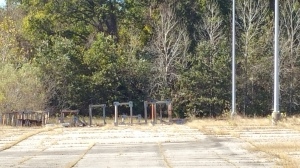 Camptown was opened in 1995, at a price tag of $14 million. Its operators filed for bankruptcy in 1996, according to the Joplin Globe. According to Greyhound Network News the track was losing $30,000 a week before it was closed. When the track closed there were 12 kennels with about 60 dogs.

“On Nov. 17 (1996), the racing commission issued “Final Orders,” a five-page document containing 32 provisions which included requirements that the track’s owner provide food, water, bedding, and an overflow kennel for greyhounds designated for adoption. Within weeks, 186 greyhounds had been moved into the adoption holding kennel.”

The rescue operation was successful.

The Capital-Journal reported the following: “Two of the original investors bought it for $3 million in 1998, then sold it in 2000 to developer Phil Ruffin, who owns the Wichita Greyhound Park and several casinos.

“Ruffin walked away from the deal because of a disagreement with the state over the investment required to open it and the percentage of return on that investment.”

Today, no activity at the property is apparent. Another property frozen in time.