On my way to the small town of Pleasanton, Kansas, this past weekend, I found myself at anot

her Kansas gem. Having lived in Kansas my entire life, I have never been to Mine Creek Battlefield State Historic Site.

First, I’ll talk about Plesanton. The City of Pleasanton was founded in 1869, according to their website after General Alfred Pleasonton, the victorious Union General at the Battle of Mine Creek. Th
e city is built in and around the battlefield site.

“It is considered by many to be the only major Civil War battlefield in Kansas! From there, our community flourished as it took advantage of the then bustling railroad trade.  Soon, churches were founded, a school was built, stores began to open up on Main Street, and the City of Pleasanton began to grow,” according to the city’s website, referenced in an above link.

According to the 2010 census, the city has about 1,200 residents. And if you’re looking for some good food while you’re there I highly recommend MeeMaw’s Country Kitchen. I got biscuits and gravy and a pancake and the food is the REAL DEAL. I love food and their food alone was worth the nearly two-hour drive!

Now on to the Mine Creek Battlefield site. The Kansas Historical Society’s website states: “On Oct. 25, 1864, on the banks of Mine Creek, two Union brigades of approximately 2,500 troops defeated approximately 7,000 Confederates from General Sterling Price’s Army of Missouri. Federal Colonels Frederic
k W. Benteen and John H. Philips led the attack in one of the largest cavalry battles of the Civil War and a major battle fought in Kansas. Their dramatic story comes alive at Mine Creek Civil War Battlefield.” 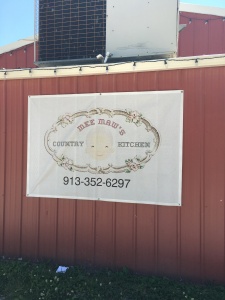 The site today includes a nice visitor’s center (which was closed the day I went) and a walking trail where you can read about the battle. The walking trail spans 2.6 miles. The site is quiet, educational and a great way to learn about the Civil War and nature. It’s worth a Kansas road trip for sure! 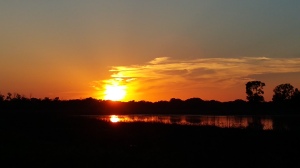 I haven’t been able to do nearly as much as I used to in these few weeks since surgery…major surgery will do that to you. But last night I was able to get out and see the world. I was thrilled to see a road we usually take was open after floods. Finally! They hadn’t done any work to it, but it was dry and passable.

An amazing, wonderful, post-flood world awaited. The views were stunning and the photos were incredible. 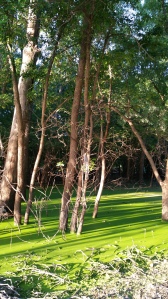 This is algae under the trees.

The highlight of the evening was running into an equally-enthusiastic man on a fishing mission. We’d seen him before on these rides. He drives an old truck and always has his old black lab with him. While standing outside marveling at the incredible views that we haven’t been able to see for months, the man parked, let his dog out, caught a few minnows in hopes of a really big fish in return and then joined us further down the road.

In listening to this man we learned he is a Vietnam veteran, with Agent Orange. He’s had a tough life dealing with broken relationships, nightmares from the war and fighting for his disability rights that took him over 40 years to obtain.

“I  just had two nightmares last night,” he said. “Man, I hope they don’t come true.”

We listened to his war stories, the government’s denial of his benefits and his stories of joy, hope and happiness. Last night it was just him and his dog. The previous night he had been fishing with family members and they had caught several fish — many were gar — which was much to his dismay. He loves to fish, hunt and enjoy his life. These are his stomping grounds too.

“If you know a woman who likes to fish, look me up,” were some of his parting words.

This man was a generous man, offering to let us fish with him, offering us beverages and plenty of stories. On that lone dirt road, we met a true gem — and I imagine a legend of sorts in the area. The next time I run into this man, I hope to do a photo shoot of sorts with him — a photo essay capturing the essence of his life, his struggles and his perseverance over it all. There’s a story in everyone, I promise. It’s just that some people are more open and willing to share than others. 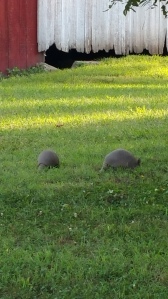 It’s those moments in life that makes the rest of the stresses melt away — in those moments listening to him tell stories about his life the rest of the world felt so far away. It was an important lesson — if we live in the moment — and allow that moment to consume us — the rest will fall away. Even if it’s just for a bit. Truthfully, the stresses of the world will be there waiting for us when we’re ready to return.

The evening was capped off with a stunning sunset over the marshes, many critters and a great feeling of joy. 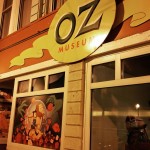 Love it or hate it (and no, this isn’t a political post) — Kansas is a pretty unique place. Who else can claim the famed Oz with Dorothy and Toto? And who else, but Wamego, can claim a fitting museum — the Oz Museum? There isn’t another state in the United States that can claim the Yellow Brick Road.

As I’ve found out, people have a love-hate relationship with Dorothy and her little adventure in Oz. While I get as tired as the next Kansan of hearing the cliche, somewhat seeming obligatory comments about Toto, Saturday night I got a pretty cool perspective on the Oz Museum and the little gem that is Wamego.

I was on a paranormal investigation with the Kansas Paranormal Research Society. The public event, which was held in Wamego, was centered around the paranormal and not only provided a bit of paranormal research, but an up-close look at places like the Columbian Theatre and the Oz Museum. 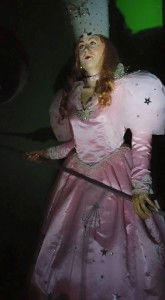 Of course, since photography is my passion, I had a blast taking photos of the characters at night in the Oz Museum. It was a rare treat to photograph them in that lighting, which was just my flashlight. See for yourself with the photos I’ve included with this post.

The event was awesome and raised funds for the Columbian, which is a true gem as well.

I feel so blessed in this life to have so many adventures — all right here in my backyard in Kansas. Kansas is a unique, wonderful state.

Follow The Wandering Pigeon: Adventures in BrandyLand on WordPress.com